Porsche has started production of synthetic fuel from water, wind and CO2 in Chile

The big topic lately is not only electric cars, but also synthetic fuels for cars with a combustion engine. The German car company is flirting with them Porsche, which, in cooperation with HIF Global and Siemens Energy, built the first factory for the production of these fuels in Chile. The pilot project is located in Punta Arenas, with the car manufacturer investing EUR 20 million in construction. This year it also invested US$ 75m in HIF Global, in which it now has a 12.5% ​​stake. The synthetic fuels produced for now will be used in the Porsche SuperCup series. Formula 1 is also expected to run on synthetic fuels from 2026, so it is possible that Porsche will see a way to use its results here as well.

So what does the factory actually do? The concept is basically simple. Electricity from a renewable source (here a wind farm) is used and this energy is used to electrolyze water, which produces green hydrogen and oxygen. The hydrogen is allowed to react with the captured CO2 to produce synthetic methanol (eMethanol). This is then converted into synthetic fuels such as synthetic “gasoline” (eGasoline) for land transport or synthetic aviation fuels. The pilot project foresees the production of 130,000 liters of fuel per year, in the middle of the decade it should already be 55 million liters and two years later then 550 million liters. At the opening, a Porsche 911 was refueled with this synthetic fuel. 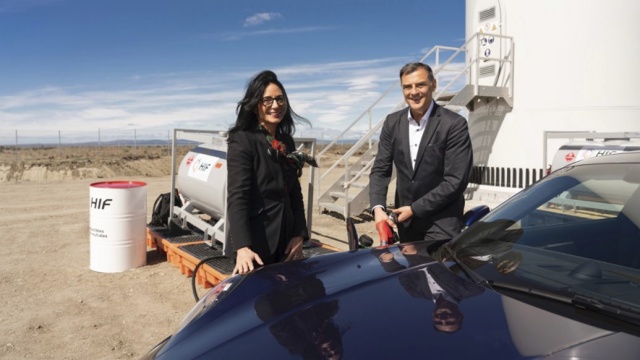 But now let’s look at some numbers. The electrolyser has a capacity of 1.2 MW, the wind farm has an installed capacity of 3.4 MW and according to Porsche it blows 270 days a year here in Chile, so it is a suitable place. As I looked at the typical outputs of the wind farms in Chile, we can expect about 9 GWh of electricity per year from the 3.4 MW installed. In this configuration, it should produce 350 tons of eMethanol or 130 thousand liters of eGasoline fuel every year. If we rely on the 30-year life of a wind power plant, then we have 3.9 million liters of fuel in 30 years. The investment in the equipment amounted to USD 74 million, which means approximately USD 19 (CZK 430) per liter of fuel without any additional taxes and operating costs. In other words, for now it seems that fuel that costs an order of magnitude, however the plan is to raise the price to about $2 per liter (without additional taxes).

Let’s go back to the annual production. A modern Porsche 911 (say 2018+) has an average consumption of 11.4 liters per 100 km among its users. The annual production of 130,000 liters is enough to drive 1.14 million km. What if electricity was used only as electricity and not made with this crazy wheel of synthetic gasoline through hydrogen and methanol? The average electric Porsche Taycan consumes 27.3 kWh/100 km for its drivers, so 9 GWh of electricity per year would be enough to drive 33 million km in an electric car. If we take into account several losses of transmission, charging and self-discharge, we will probably be in 23-25 ​​​​million km. Once again it is being shown that if we have electricity, it is very inefficient and a waste of energy to use to produce other fuels such as hydrogen, let alone synthetic gasoline.

*The article was translated based on the content of Svět hardware from www.svethardware.cz. If there is any problem regarding the content, copyright, please leave a report under the article. We try to process as quickly as possible to protect copyright. Thank you very much!

Alzheimer’s with many prejudices and misunderstandings